On 18th May 2019 two founding members of the Rockin’ 50s Rock & Roll Club where inducted into the Victorian Rock & Roll Dance Association’s (VRRDA) Hall of Fame. This is their story….so far.

In 1988, a couple of significant events happened in Bendigo that would shape the lives of Bill and Maree Oldham over the next 30 years. A former cabaret band started playing 1950’s Rock’n’Roll music, and changed its name to Sha Boom, and a 50’s café called Chevies opened in the main street, all decked out in 50’s style, complete with Chevy car on the wall, and a juke box. An advert was placed in the local paper calling for anyone interested in 50’s Rock’n’Roll music and dancing, to get together. Around 30 people answered the ad, and met at the café in May 1988, and it was here that the Rockin’ 50’s Rock & Roll Club Bendigo was formed, with its logo being a picture of Buddy Holly’s head.

Bill and Maree are founding members of the Bendigo Rockin’ 50’s Rock & Roll Club, and are fondly considered to be the heart of the club. They have helped teach thousands of people to dance at their weekly dance lessons. They have also had a lot of fun over the years participating in Dance Demos for local sports clubs, aged care homes, and church clubs, as well as dancing on floats in Bendigo’s Easter festival and in the Australia Day Rock’n’Roll show that the club has performed for Rotary for the past 25 years.

Over the years, the club has called several venues home, including the Manchester Arms Hotel in Long Gully, followed by the Farmers Arms Hotel at Junortoun, and are now proud to have The Bendigo Club in Strathdale.

Over the years, the Rockin’ 50’s Club has ranged from its initial membership of 33 to hundreds, it has taught thousands of people to dance, and held many fantastic dances. For more than 30 years, Rockin’ 50’s members have entertained the people of Central Victoria, performing dance demonstrations at various locations for the fun and enjoyment of their members, and the general public alike.

Bill and Maree have always been happy to organise and participate in community events, along with organising trips to dances and festivals throughout Victoria and interstate. Through their leadership and involvement, the Rockin’ 50s Rock & Roll Club have held numerous Rock’n’Roll dance classes, and provided regular dance lessons to many eager learners of all ages over a period of 30 years.

The Club has held on average 4 dances per year and it has been their privilege to have had the best Victorian bands perform for the club over that time.

Bill and Maree don’t know which band would be their favourite, as they have had a lot to choose from, but they do love their Aussie Rockabilly!

Bill was Club President of the Rockin’ 50’s for a period of 9 years, including the last 4 years from 2015-2018. Between them, Bill and Maree have held key committee positions for many years, including Vice President, Treasurer, Committee Assistant, and 10 years as Ticket Officer.

Over the years they have met the nicest people both in Victoria and interstate. They love attending festivals and dances and catching up with all the familiar faces of Rock’n’Roll. The memorable festivals for them were the early Wintersun festivals, Brisbane’s Greazefest and Arthur Mats festivals in Camperdown, and Shepparton. Other great memories are the Chisholm Institute’s Rock’n’Roll Saturday nights, and Cliff Jolly’s Ferntree Gully Sundays. The most memorable event they attended was Viva Las Vegas.

Bill and Maree love nothing more than dressing in authentic 50’s gear, cruising around in their ‘57 Ford Customline and hitting the dance floor somewhere in Australia. Their favourite shops from the past are Hound Dogs Bop Shop and Rocco’s handmade shoes, both now closed. Now that they are both retired, they like to hitch up their caravan and head to warmer places over winter, always on the lookout for some Rock’n’Roll action!

Some of Bill and Maree’s greatest achievements: 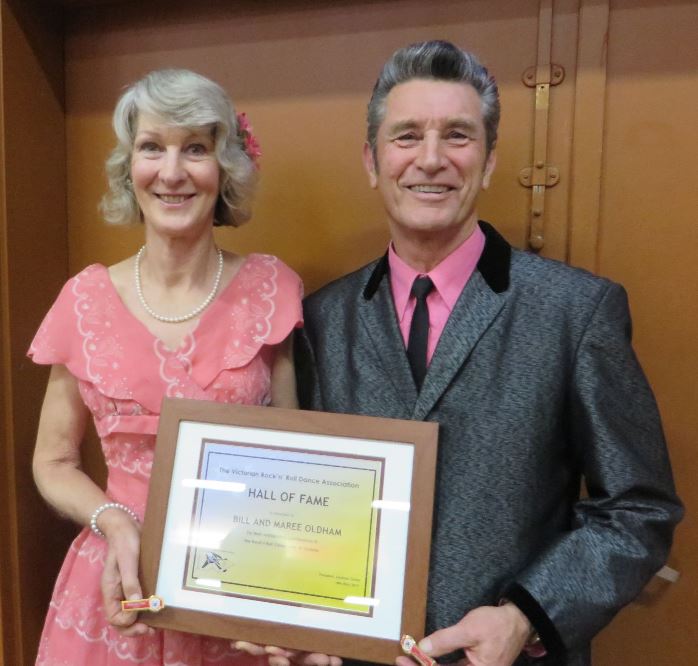