It seemed like a good time to place an advert in the local paper, to see if there was enough interest in forming a Rock ‘n’ Roll club, 33 people were present at the meeting to form The Rockin’ 50’s Rock & Roll Club in May 1988.

In the past the club has called several venues home, the Manchester Arms Hotel in Long Gully, then the Farmers Arms Hotel at Junortoun and now we are proud to call The Bendigo Club in Strathdale our base.

Over the years the club has had memberships ranging from 33 to hundreds, it has taught thousands to dance, and held many fantastic dances using most Melbourne top bands.

For more than 30 years Rockin’ 50’s members have entertained the people of Central Victoria, performing dance demonstrations at various locations for the fun and enjoyment of our members, and the general public alike.

The club has a large achive of photos and memorabilia, it is displayed at our club dances and especially on party nights, so have a look, lots of wonderful history. 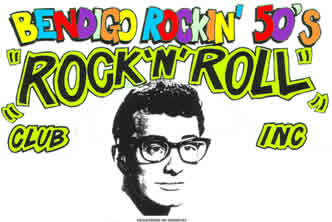